“Who Am I?” Chinese Zodiac Origami Book

I just discovered a wonderful book at betterchinese.com, makers of the well-known and much-used-in-schools “My First Chinese Words” books and cd. It is a Chinese zodiac book entirely illustrated in origami by its 10 yr old author, Justin Tsin. Justin is already an accomplished book creator. His first book “What Would You Imagine?” won the 2009 Mom’s Choice Award Outstanding Young Author/Illustrator and Children’s Picture Book – Bilingual. 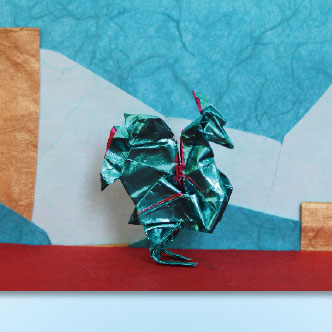 He hails from San José, California and is currently doing a book tour mostly in libraries in the San José, San Francisco, Bay area. Google him to see if he’s presenting near you. Here is a preview of what you might be in for: A video of Justin presenting his first book in a San José library when he was 8. 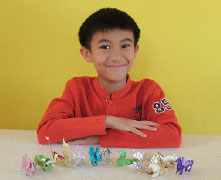 This new book is a good topic for today, the day before Chinese New Year, on Feb 3, which brings in the Year of the Rabbit. It gives a personality description as well as easy hints about the animal (“I have a curly tail and a big snout” “I am a good friend to humans and wag my tale when happy”) and asks you to guess what the animal is. When you turn the page, it shows the origami animal made by Justin, against a paper collage background. I think this guessing game is more engaging and allows the child to better remember the zodiac characters than a simple straight forward exposé about the animals, which most Chinese zodiac nonfiction books are. 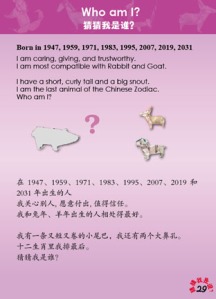 The book is exceptional not only in that it is written and illustrated by a 10 yr old, but also in that it is bilingual English and Chinese. The mandarin seems to be written in simplified characters, with no pinyin, so it would be a challenge for non-chinese-speaking parents however. The text is fairly basic, with simple sentences, so personally I find it just enough of a challenge: I do know most of the animal characters and can read simple sentences. But for those just starting out in Chinese, it wouldn’t be usable to help their child learn more Chinese words or characters (unless there is an appendix, which isn’t evident from the pdf preview:”Chinese Zodiac: Who Am I”. His previous book, “What Would You Imagine” does however (according to the Amazon.com listing above) have pinyin. It too is illustrate with origami animals. 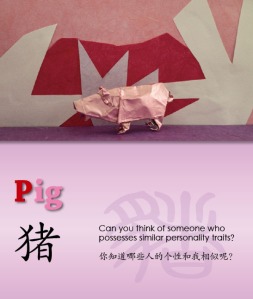 What is valuable however, is the cultural information about the Chinese zodiac. So for those who speak only English it is still a recommended book. Justin speaks about learning origami and his inspirations for his background paper collages as well, in the back of the book. And there are teaching tips about using the book as an educational tool as well.

Truly a beautiful book from an artistic point of view, inspiring for young book creators or artists, and culturally educational.